Song
When We Dance
Album
Into The Light
Rank
18

On September 21, 2018, a very special new album Music For Guitar and Orchestra was released. The album (Navarro’s 24th) features special guest performances from drummers Dave Weckl (Chick Corea, Mike Stern) and Chad Wackerman (James Taylor, Frank Zappa), bassist John Patitucci (Wayne Shorter, Al Dimeola), saxophonist Eric Marienthal (The Rippingtons, Jeff Lorber) and harpist Lori Andrews. Eight (8) songs which Ken has scored and arranged for orchestra and his guitar are a part of this unprecedented new album which includes new versions of some of Ken’s most popular songs including “Smooth Sensation”, “The Stars, The Snow, The Fire”, “Juliet” and many more. You can get a signed CD or Download right here. And you can get scores, individual instrument parts and guitar parts right here.

2014 found Ken creating his first ensemble recording in 4 years, Ruby Lane Including the huge hit title track, “Ruby Lane”, the album stayed in the Top 5 on all of the national smooth jazz radio charts for many months as well as in the jazz charts at both iTunes and Amazon.com.

In 2012, Positive Music Records released Ken’s The Test Of Time. This album marked a landmark in Ken’s musical direction. It is Solo Guitar like you never imagined it. In each of the 12 songs that make up The Test of Time, Navarro delivers a genuine, flawless performance, where all of the melodies, bass lines, harmonies and even percussion are masterfully played simultaneously on just one guitar without any overdubbing. Some of the contemporary classics included are The Police’s Message In A Bottle, John Lennon’s Imagine, Glen Campbell’s Wichita Lineman, Pat Metheny’s Letter From Home and Santana’s Europa.

Ken’s 19th CD release Dreaming of Trains was released on March 16, 2010. It received two pre-nominations for the 2011 Grammy awards. Ken’s nine new compositions and his signature acoustic and electric guitar work are supported by world class musicians including drummer Joel Rosenblatt (Spyro Gyra, Manhatten Transfer), acoustic and electric bassist Tom Kennedy (Dave Weckl, Al DiMeola), and keyboardist Jay Rowe (Special EFX, Marion Meadows). “Dreaming of Trains” was the follow up to his breakthrough release of 2008, The Grace of Summer Light which was named the #1 Contemporary Jazz CD of 2008 by Jazz Times magazine.

Navarro’s 2007 CD The Meeting Place and his 2005 release Love Coloured Soul were in the National Jazz Charts for 62 weeks, reaching #6 in Radio & Records national smooth jazz airplay chart in November of 2005. Love Coloured Soul marked Ken’s return to his own record label, Positive Music Records. Ken’s 2003 release All The Way, and his 2002 CD Slow Dance spawned numerous radio hits including “Bringing Down The House”, “In The Sky Today”, “So Fine” and “Healing Hands”. Ken’s 2000 CD release Island Life scored two hits at smooth jazz radio including “Delicioso,” as well as the title track keeping the CD on the airwaves for a solid 52 weeks! 1999’s In My Wildest Dreams continues to be one of Ken’s top sellers and 1998’s live CD & Video Ablaze in Orlando has been acclaimed as one of the best live jazz CDs of the decade. Smooth Sensation, released in 1997, was in the Top 10 of Radio & Records’ Smooth Jazz chart for 12 weeks, helping to make the CD the #17 Smooth Jazz album of 1997. Other recent releases from Ken Navarro include his 1996 album, When Night Calls, featuring Eric Marienthal on saxophone, and Christmas Cheer, a holiday album of contemporary jazz guitar and acoustic piano duets.

Ken’s 1995 album, Brighter Days, was voted the #9 album of the year by Smooth Jazz radio. Brighter Days heralded a bold step forward for Ken, bringing to the forefront the strong R&B elements that have always been a part of his music, and enlisting a powerhouse of support from featured solo artists including former Rippingtons sax man Brandon Fields. Brighter Days reached the national radio top 5 and held a position in the top 20 for six months in 1995. His 1991 release, After Dark, was selected for screening by the 1991 GRAMMY nominating committee. His successive albums, The Labor of Love (1992), I Can’t Complain (1993), and Pride and Joy (1994), all reached the top 5 in national radio, firmly establishing Ken Navarro as a mainstay on Smooth Jazz radio play lists.

Ken began his recording career in Los Angeles as a premier session guitarist, performer and composer, performing and recording with artists as diverse as Doc Severinsen, Nell Carter, John Patitucci, Eric Gale, Vicki Carr, Dave Koz, Ann Jillian and Alex Acuna. In 1990, Ken established his own musical identity with the release of his debut album, The River Flows. With each successive album, Ken has received increasing acclaim and recognition as a leading stylist in Contemporary Jazz.

Ken’s contribution to Contemporary and Mainstream Jazz goes beyond his personal artistry. Ken has produced successful albums for Narada/EMI recording artist Eric Darius as well as saxophonist Tony Craddock Jr. and pianist Jay Rowe to name a few. As founder of Positive Music Records, Ken is responsible for launching and furthering the recording careers of saxophonist Brandon Fields, guitarists Grant Geissman, Thom Rotella and Pat Kelley, and keyboardists Gregg Karukas, Jay Rowe and Marcus Johnson. Ken’s vision of a musician’s record label has enhanced the genre with over 35 new artists and 100 releases.

Ken Navarro #18
Guitarist Ken Navarro finds himself at #18 on the countdown for the week of April 26, 2020, with his tune "Into the Light."
Download Ken Navarro's Single "When We Dance" 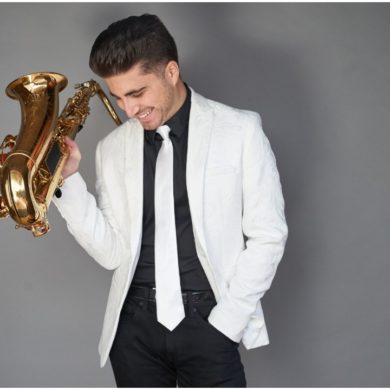